More on the Brentford Squatters 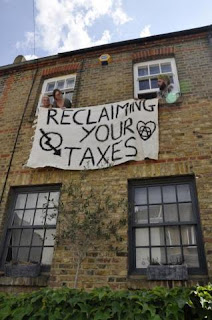 Despite the BBC's silence on the matter - presumably to avoid a massive gathering at the house - the story has made the Observer, albeit in a disappointingly sober and matter-of-fact way. The coverage at Demotix is much more fun.
However, I'm puzzled by the claim that the squatters got in through an open window, much having been made of the boarded-up status of the house. In a high-profile case like this where, I hope, the whole point is to get to court and force a public examination of the facts, the squatters would be fools not to do everything by the book and avoid all criminal damage.
Since photos of the protest show the house completely unboarded, I can only assume that the Keens, in an attempt to deflect criticism, 'pulled an Uddin' and showed up to demonstrate that 'it is our main home - really it is!', unboarded the windows and then forgot to close them all before leaving to go back to their luxury riverside flat - at least I'd like to think so; it would have a certain poetic justice, after all.
Update: Interesting comment here from Guido's blog suggesting the work in progress looks suspiciously like doing up to sell. Given the Keens' claim for a £520,000 mortgage on their £500,000 luxury flat, are we also subsidising the Brentford renovations, enabling the couple ultimately to pocket a large premium at our expense?
Posted by Macheath at 12:10