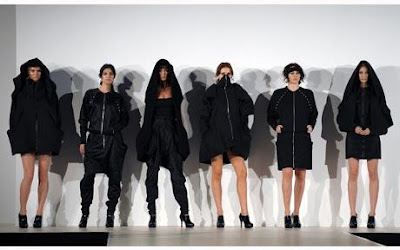 First there was heroin chic, now there's stabbing style. Today's award for pretentious and unpleasant navel-gazing goes to the fashion designer whose latest collection, 'inspired by knife crime', is on show at Harvey Nichols this week.
Every now and then, you see a news story of such jaw-dropping strangeness that you think it has to be a hoax, but this is reported in po-faced style by the Telegraph, hardly a hotbed of tabloid inaccuracies.
The 'exciting young talent' responsible for this assortment of hooded tops and modified tracksuits seems a little confused in his thinking, claiming inspiration from the "narrative of 19th century Japanese pottery" but also including the statement that "knife crime is an issue that has affected and somewhat darkened the society that we live in today".
Somewhat? Somewhat? You mean 'it's all a bit unpleasant, but guys, your clothes are great!' Still, he also asserts that his work is "not just for anyone" and was "not designed for people who commit crime" but the "honourable victims", so that's alright then, isn't it?
As an exercise in tastelessness, this surpasses even the satirical film Zoolander, where New York's fashionistas swoon over the rags and dirt of the homeless-inspired 'Derelicte' collection. Its creator is now being tipped for the top, so look out in future for collections inspired by random muggings, gay-bashing and racist assault.
Posted by Macheath at 08:29