"Worried about your waistline while you watch the football? Concerned you might be piling on extra pounds as the tension mounts? Fear not, help is at hand!"

Now once again, spurred on by the 'obesity crisis', Nanny has girded her formidable loins and issued stern warnings to those of you intending to spend the next few weeks wallowing on the sofa in a calorie-induced stupor.

This time her organ of choice is not the Food Standards Agency - they are busy nagging us about the dangers of raw meat - but the spuriously-named NHS Choices website which has helpfully published its 'World Cup 2014 Healthy Snacking Tips'.

The advice is much the same as last time, starting from the interesting premise that British audiences are incapable of watching a televised sporting event without some form of hand-held sustenance.


While you are glued to the TV for a few weeks following the fortunes of Hodgson's men, here are 10 healthy snacking tips to make sure your diet stays match fit.

All the usual hair-shirt suspects are there - oven-baked low-salt crisps, reduced-fat humus and unsalted peanuts, along with some new additions like air-popped popcorn (no sugar, butter or salt, of course) and fat-free yoghurt.

It all rather begs the question of who is the target audience, since NHS Choices is largely preaching to the converted and the worried well. Those who trawl its pages are surely in search of medical advice -the site's valid raison d'être - rather than a condescending lecture on 'Living Well' - unless, of course, they are fully paid-up Puritans seeking tangible approval for their ascetic lifestyle.

Even the most optimistic healthy-eating evangelist could hardly expect that, having discovered the page by accident or design, readers who have eagerly stocked up on beer and Pringles will experience a Damascene conversion and rush out to buy rice cakes and low-fat humus instead.

What is really galling about this is that someone was presumably paid to write this patronising drivel - if write is the correct word to apply to a piece in which 'snack' is used as a verb. It's something to bear in mind next time you hear about reduced NHS spending leading to cutbacks in patient care.
Posted by Macheath at 08:39 2 comments:

He shoots, he scores!

Once again, the World Cup is upon us, a phenomenon easily recognized by ubiquitous England flags, a plethora of pointless memorabilia and an alarming tendency on the part of devotees to talk in meaningless cliches.

Meanwhile, every commercial enterprise which can squeeze in some connection, however tenuous, is making use of World Cup fever to bring in the punters. Thus Hatton Country World decided this week to anticipate England's first fixture with a match between two opposing teams of guinea pigs.

The idea, apparently, was to predict the result using animals; this is always a crowd-pleaser during the football tournament and guaranteed to draw the visitors. The ancient Romans, of course, had much the same idea, only with more entrails.

Twenty-two of the little animals were selected for the England-Italy match, dressed in tiny team strip and given a ball full of grass to play with. (The final score, for anyone who may unaccountably be interested, was England 0 - Italy 1.)

However, much as often happens in the human game, events on the pitch have been overshadowed by the headline-grabbing priapic antics of one of the squad.

To the surprise of staff, some of their carefully-segregated females were recently discovered to be pregnant. Further research revealed that a lone male had somehow found his way into their pen, where he clearly made the most of the opportunities on offer:


"We don’t know how long Randy was in the female enclosure but it could have been several weeks which would have given him time to go round the entire female population."

The park, according to reports, is currently home to around 300 guinea pigs housed in an assortment of anthropomorphic settings to entertain youngsters, though one might have thought that, after the first hundred or so, guinea pig fatigue must surely set in for even the most obsessive child.

Now, thanks to Randy's contribution of up to 100 potential pregnancies (outstripping - one hopes - even Tyneside bus-stop Lothario Keith MacDonald), the population looks set to double over the next few months.


Staff are now looking to build an extension to the guinea pig farm to accommodate Randy’s huge brood.

Hence all the media publicity, presumably; it will surely take a fair few entrance fees to house and feed them all.

Unless, of course, the management have other plans. From Wikipedia:


Guinea pig meat is high in protein and low in fat and cholesterol, and is described as being similar to rabbit and the dark meat of chicken.

Looking for a new investment opportunity in a growth industry?

How about this one, endorsed by no less than an associate professor at the University of St Andrews School of Business Management?


“It's a brilliant business model because it creates its own demand.”

And what is this sure-fire success story? Those cynics still in possession of all their marbles* may not be surprised to learn that he's talking about tattoo parlours which offer a removal service as well.

We've commented here before on the rise of the tattooist on Britain's high streets; now, with the advent of mass-produced laser tattoo removal equipment, you can now pay someone £100 to ink Miley Cyrus onto your left buttock, then pay the same person ten times that amount to erase it when the embarrassment gets too much (although, by all accounts, you won't be able to sit down for a week afterwards).

The future pain, however, is irrelevant; in much the same way that the advent of the gastric band appears, for some at least, to be a licence to overeat in the certainty that a perceived quick fix is available should they require it, laser tattoo removal offers the possibility of indulgence today and redemption tomorrow, possibly even at public expense.

This, presumably, is why we are seeing headlines like 'What is tattoo roulette? Fearne and McBusted lay down the rules'. Who Fearne and McBusted may be I neither know nor care, but 'celebrities' drawing lots to decide which one of them gets a silly tattoo is an idea with Zeitgeist written all over it and will doubtless be emulated in bars up and down the land.

As fashions change, all those oh-so-trendy early 21st-century doodles are going to start looking decidedly out-of date and inevitably, as time (and gravity) takes its toll, that deliciously ironic My Little Pony peeping coyly over your waistband will begin to resemble a leering elderly cart horse in drag.

If you can get rid of it, you probably will, which is why tattooists everywhere are investing heavily in expensive removal equipment. With surveys suggesting that 17% of people with tattoos subsequently regret them, there's going to be plenty of work out there.

While an average-sized tattoo will set you back around £50-£150, removing it may well run into the thousands. It's a win-win situation; studios can happily cater for the most egregious whims of their clients secure in the knowledge that every tattoo today is a potential goldmine ten years hence.

UPDATE: While we're on the subject, from today's Metro:


A woman who set up ‘the world’s first tattoo parlour for children’ was surprised to receive genuine enquiries from parents keen to ink up their kids.

Sadie Hennessy created the thought-provoking art project by placing an ad outside a high street shop in Whitstable, Kent. Her aim was to incite discussion about the sexualisation of children, but the controversial ‘business’ actually had ten genuine requests.

Another asteroid, another drink!

When we began the practice of raising a glass to every near-Earth asteroid five years ago, we didn't realise quite what we were letting ourselves in for. This chart gives some idea of what we're up against, even given the fact we don't usually pop the cork for anything over 1.5 million km away. 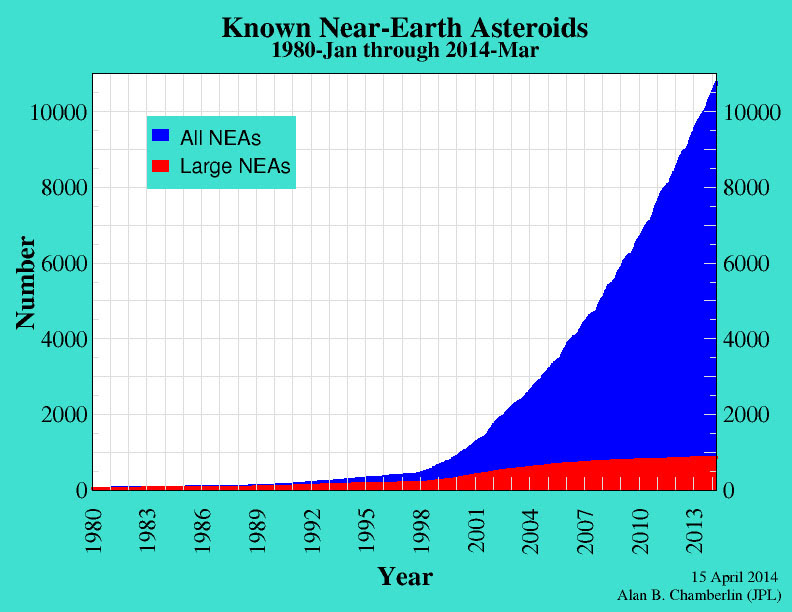 According to Universe Today,

To earn the designation of 'potentially hazardous', they need to approach within 7.48 million km and be at least 150m across; the sort of thing that would make a very nasty mess indeed should one ever turn up here. While every asteroid catalogued is one less unknown, there's something unsettling in the idea that we have only had a few days notice for most of the recent near misses.

While optimists talk of untold riches mining asteroids and plans are afoot to capture one and park it somewhere convenient, we should not forget the words of NASA's chief when asked what we could do if an asteroid were discovered to be heading straight for us: "If it's coming in three weeks, pray."

Anyway, if you're at a loose end with a glass in hand at 9pm (BST) tonight, the virtual telescope will be covering the flyby of the newly discovered 22-metre-wide 2014 KH39, which will be whizzing past 432,000 km above our heads at a decidedly nippy 25,000mph.