For pity's sake, don't encourage him! 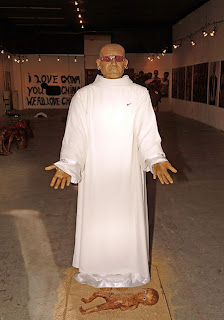 Church of England attempts to broaden appeal with songs by U2 and prayers for Google
It sounds like something from Private Eye’s latest number; in an attempt to appeal to ‘yungpeepul’, the Archbishop of Canterbury has launched a new book as part of ‘Fresh Expressions’, a programme designed to ‘boost church attendance with more relevant and exciting services’.
These include a service at which worshippers are told that"our planet is messed up" and "things are not right" before walking round to ‘meditate at eight "prayer stations" representing themes such as "gender equality" and "environmental sustainability".’
Then a psalm is recited in "beat poetry" style and prayers are said "for the corporate world, for influential CEOs who oversee billion-dollar industries", naming, among others, Bill Gates, Dr Eric Schmidt of Google and H Lee Scott Jr of Wal-Mart Stores.
Are your toes curling yet? It gets worse; the new service book also brings us the U2charist, in which traditional hymns are replaced by the self-important maunderings of Bono & co. Presumably pretentious Armani sunglasses are optional, although the priest’s vestments will be made by Mrs Bono’s hugely expensive fair-trade clothing line.
It’s incredible to think that this was created without the intervention of Ian Hislop, yet the Church has managed, entirely unassisted by satirists, to come up with this monstrous hybrid of Holy Communion and U2 tribute night. With any pop musician this would be a dubious exercise, but considering Bono’s messianic delusions, the CofE may have taken on more than it bargained for.
As the T-shirts say: Make Bono History.
Posted by Macheath at 09:09