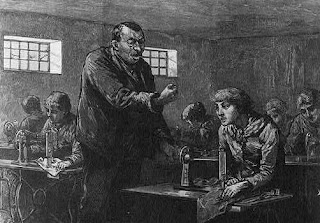 Sometimes it's not much fun being right. Back in January 2009, I wrote this: With exchange rates signalling the end of cheap imported fashion and unemployment once more stalking the streets of our cities, there is a serious risk that sweatshops will multiply in Britain to fill the gap.

Today brings a press release (via the Independent) from Channel 4 ahead of tonight's Dispatches: Clothing on sale in the high street is being made in Britain in dirty, dangerous and “appalling” conditions.

An undercover reporter has found clothing made for New Look, Primark, Peacocks, Jane Norman and bhs being made by workers -  many of them working illegally - paid half the minimum wage in “dangerous, pressurised sweatshop conditions”.

We shouldn't be surprised, though; when a large cappuccino will set you back more than the cost of a T-shirt, there has to be something badly skewed in the economics of supply and demand. Disposable fashion has become the norm, with a rapid turnover matched by rock-bottom prices.

There's a powerful lobby that argues sweatshops are a necessary stage on the ladder of economic development and a poorly paid job is better than no job at all, but no worker should have to put up with this:

“The basement unit was cramped, over-heated and inadequately ventilated, with unsanitary toilets, dirty staircases and poorly lit corridors. With the greatest risk being fire, his only fire exit was completely blocked.” There were no clean facilities for providing drinking water.

The retailers involved have since launched their own investigations. Perhaps the first thing they should look at is the wholesale price charged by their suppliers - if the garments are cheap enough to be sold on at a profit for less than the price of a coffee, there should surely have been some questions asked.

We're in Dickensian territory here - according to a Sikh elder in Leicester, “It’s like slave labour, it’s like going back a hundred years in the way they treated. The people are so helpless they just got to do whatever they can... the bosses can shout at them or they can insult them, and these people can’t do anything about it.”

There's something monstrous about poorly paid men and women hunched over sewing machines for many hours at a time producing disposable fashion for the momentary amusement of an over-indulged generation conditioned to see cheap clothing as an entitlement.


It's bad enough when these workers are on the other side of the world out of reach of UK legislation - when they could be living in the next street to their oblivious customers it becomes downright immoral.

Keep on passing the open windows...

It had to happen. Marketing has progressed so far beyond irony that there is no longer a word for it. An air freshener manufacturer is selling 'green fresh fragrances inspired by open windows.'

So you can now sit in your hermetically sealed, double glazed home (in accordance with new building regs), and rely on an electrically operated gadget to pump out regular doses of chemically generated 'open windows, newly mown grass and morning breeze.'

'WARNING: IRRITANT
Contains citronellol and bourgeonal. May cause sensitization by skin contact. Harmful to aquatic organisms, may cause long-term adverse effects in the aquatic environment. Avoid contact with skin. If swallowed, seek medical advice immediately and show this container or label. Wear suitable gloves. Spillage of the liquid might cause damage to surfaces. People suffering from perfume sensitivity should be cautious when using this product. Air fresheners do not replace good hygiene practices.'

Neither do they replace chemical-free air - unfortunately something of a rare commodity these days. From the florist Demetrius observed spraying perfume on her wares to the youngsters strutting about town in a suffocating miasma of spray-on 'fragrance', the chemical-mongers are everywhere among us.

And so is childhood asthma, affecting an estimated 1.1 million children in the UK. Concerned parents may well check NHS Choices, to be told that common triggers for attacks in susceptible children 'include house dust mites, animal fur, pollen, tobacco smoke, cold air and chest infections.'

So you take your fags outside, wrap up warm and don't let the cat sit on the baby. No mention of three different combinations of chemicals electrically pumped into the air every 45 minutes, in rotation 'so you always notice them'. Perhaps they mention it further on:

'Environmental factors that may trigger asthma include exposure to air pollutants, such as cigarette smoke, and certain substances that can cause allergic reactions (allergens) such as pollen and animal fur.'

That would be a 'no' then. And even when other suspects are brought in later - fungi, aspirin and sulphites - the nearest it gets is 'chemical fumes', which hardly suggests that parents might want to open a window instead of resorting to air freshener - a misnomer so blatant it almost passes unnoticed.
Posted by Macheath at 21:38 3 comments: