Chariots of the Rock Gods

Some time ago, we reported that Bruce Dickinson was backing a project to build a modern-day airship.

Mainstream production came a step closer this week with the unveiling of the Airlander, a 92m long craft filled with enough helium to make the Treorchy Male Voice Choir sound like a chorus of gnats. The vehicle could provide an ingenious solution to the problems of moving heavy items in areas with no ground access or runways.

Dickinson himself has played an active part in the publicity, appearing on the Today programme where he memorably compared the Airlander to one of the Thunderbirds (to the secret delight, I imagine of a host of forty- and fifty-somethings). He now has plans for a non-stop trip twice round the world:


"It seizes my imagination. I want to get in this thing and fly it pole to pole."

Mine too. If there is anything that might serve as some consolation for this week's conspicuous lack of giant serpents, wrathful Norse Gods and supernatural wolves, it's the thought of Iron Maiden's lead singer cruising above our heads in something that looks like Thunderbird 2.
Posted by Macheath at 15:23 8 comments:

With only a few hours to go before Fenrir the Wolf bares his fangs and the mighty god Thor battles the serpent Jörmungandr, heralding the Twilight of the Gods and the end of life as we know it, the Times quotes a latter-day devotee of Odin who definitely has the right attitude:


"I'm all prepared - I'll be in the pub at 10am and if the world is still here by the time I get home, I'll be pleasantly surprised."

There was cheering news recently for those of us of an absent-minded nature; something went missing this week besides which all those car keys, glasses and phones pale into insignificance.

The 270-metre space rock known as 2000 EM26 was slated to skim past Earth early on 18 February, coming within 3.4 million kilometres of our planet.

So far so routine - it's been a busy week and we don't tend to get excited unless an asteroid gets closer than 500,000km or so - but there's more:


When a robotic telescope service trained its eye on the predicted position, the asteroid was nowhere to be found.

Oops! Admittedly there's very little chance of it heading in our direction, though it's a happy coincidence that the Viking Twilight of the Gods is, in theory, due this weekend. (Other predicted events of Ragnarok include earthquakes and vast floods, just to let you know...)

The first thing you usually ask when something goes missing is, "Now, when did I see it last?" In the case of 2000 EM26, it was back in 2000, when it was discovered and briefly observed by astronomers. As a result of those calculations, observers at SLOOH lined up their lenses ready for a live broadcast of the flyby this week.

Now SLOOH's CEO has been reduced to putting up forlorn notices on the virtual lamp-posts of the internet calling on amateur astronomers to keep an eye out for the thing. Sadly there's no reward - just honorable mention on their website.

Still, if you happen to see a large space rock hurtling past you this weekend, it might be kind to let the chaps at SLOOH know about it - unless, of course, it's headed straight for us, in which case apocaholics of a Viking persuasion are in for the ultimate treat.

See you in Valhalla!
Posted by Macheath at 21:03 7 comments:

Quote of the week - Levelling criticism

"I will apologise for probably not having done enough to twist arms..."

Lord Smith's apology of an apology after coming under fire over the Somerset floods.

The rising waters have caused much comment in the Tavern, not least because one of the clan grew up a stone's throw from Muchelney and saw at first hand the floods of 1947. The results of the collective musings are, in no particular order:

Finally, a quick bit of research suggests that the higher echelons of the Environment Agency are stuffed with graduates of 'top' universities and Lord Smith himself boasts highly impressive academic credentials (albeit in the field of English Literature). Is it possible, I wonder, that this situation has fostered something of a sense of superiority over the horny-handed sons of toil and their petty concerns?

I suspect the Somerset farmer whose urgent request for channel dredging was rejected last year would certainly think so.
Posted by Macheath at 09:47 6 comments:


Oh dear, a Sochi calamity
USA bobsledder locked in a lavatory;
Posted on twitter, it's caused much hilarity,
Don't you just long to be there? 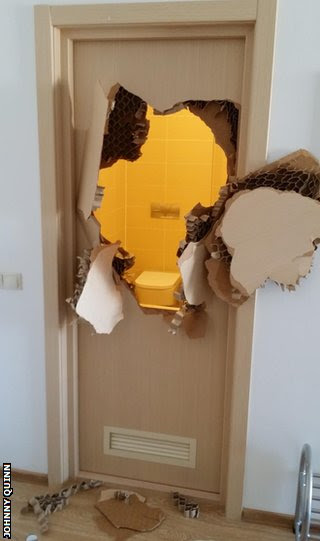