A Garden is a Lovesome Thing... 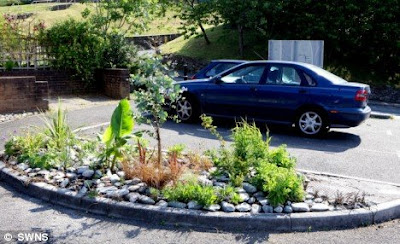 
A retired florist has been threatened with criminal prosecution by a council after planting a flower garden on a neglected patch of land in a car park.


How many nit-picking jobsworths does it take
To forbid an urban garden?
Just who exactly is offended when you make
A forbidden urban garden?
With a bit of buddleia,
Jasmine or a fuchsia,
What was a crumbling mess for thirty years
Can be turned from an eyesore into a thing of joy,
As a pretty urban garden.


"How did you think you could break the rules and make
An illicit urban garden?
We’ll let you go if you say it's a mistake
And you beg the council’s pardon.
Put back every cobblestone,
Leave the bramble stems alone,
Uproot the flowers and let it run to seed,
Or we’ll do it ourselves and we’ll make you pay the bill
To remove your urban garden."