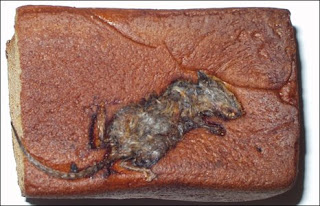 In another strange bit of news classification - on a par with this gem - the unpleasant discovery of a dead mouse in a malt loaf has been placed by BBC news in 'Northern Ireland Politics'.
As the deceased rodent was the subject of a court case, it seems that it automatically qualifies as political news. Since the BBC has at its disposal a juggernaut of news-gathering machinery, are we to assume that the same resources were brought to this story that would normally be deployed for rather more momentous events?
For those of us who grew up to the constant soundtrack of reports of Northern Ireland's sectarian violence, there is something truly satisfying in the knowledge that things are currently peaceful enough for journalists to go out and report on dead mice.
Posted by Macheath at 15:46