For Fans of Blue String Pudding 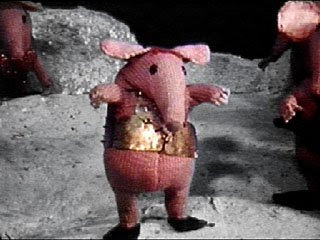 A fantastic post from Plato Says on the missing Clangers episode - Vote For Froglet - links to the BBC's cult TV Clangers page.
Here you can find such trivia as the fact that the Clangers' feet were nailed to the set to keep them in place (Aaaah!) and a link to directions for knitting your own Clanger. Fans of the series will, of course, be aware that instructions for making the inferior felt version appeared in the Clangers Annual.
The best bit of all is Oliver Postgate's description of the Creation of the Clangers' world:
In the beginning was the void and the void was dark and without form, being 'eight by five' sheets of battened hardboard painted midnight blue. And on the first day took we a bucket of white emulsion and big floppy brushes and threw white stars thereon, even unto the extremities thereof. And we looked upon it and saw that it was terrible.And on the second day we painted it out and started again...
A great man, sadly missed.
Posted by Macheath at 16:23