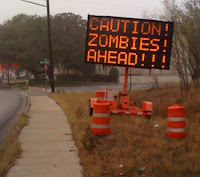 We were treated to a valuable insight into the psyche of the computer hacker this week as the good folk of Austin, Texas were warned by their highway signs of an imminent zombie invasion. Given the potential havoc a skilled hacker could wreak, it comes as a reassuring surprise that their ultimate goal was relatively harmless fun.
Unless, of course, anyone took it seriously. After all, Orson Welles sparked a nationwide panic with 'War of the Worlds', and a worryingly large proportion of US citizens (unlike our own David Cameron) are convinced that aliens are among us. Still, if it turns out to be real, we are, thanks to Newgate's resident Artful Dodger, relatively well-briefed on how to survive a zombie uprising (stockpile food and remove your staircase, apparently).
Finally, spare a thought for the unfortunate inhabitants of Dubai; as though raw sewage and toxic waste were not enough to contend with, they have also been visited by Piers Morgan (I'm sure there's an analogy in there somewhere).
Posted by Macheath at 19:07