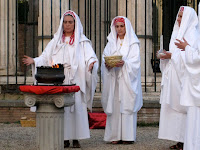 So Obama fluffed the oath. The supreme orator is as fallible as the rest of us. In a system priding itself on following the Roman structure - Capitol, Senators and all - there can be only one possible course of action.
The tiniest error in a state ceremony in ancient Rome meant repeating the entire ceremony from the beginning, even if it lasted several days. So, instead of the quick remedial swearing-in behind closed doors - in itself, food for conspiracy theorists - let the whole triumphal progress be reconstructed and run through once more (only without Bono this time - please!)

That'll teach them to subject us to endless footage of crowds being herded about and chilly reporters breathlessly indicating the spot where 'something will be happening in about 4 hours time' (at the expense of any real news). Sure, we're interested in Obama's presidency, but it's about time the Americans (and the BBC) learned to separate the office from the spectacle.
Posted by Macheath at 08:41