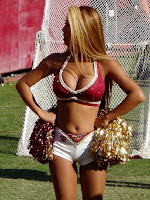 'Ya-a-a-ay!' News from the always surreal world of cheerleading this week that a 34-year-old stole her daughter's identity to enrol in high school and try out for the cheerleading squad.

In Hollywood you could be sure of a happy ending ('School of Rock', anyone?) as she and the girls achieved acclaim and success, but real life is sadly rather more complicated.
A truant officer sent to investigate the absence of the supposed 15-year-old found Wendy Brown in a police cell charged with unrelated forgery. Following a long history of fraud and criminal activity, she was committed to a psychiatric unit yesterday after a court accepted a diagnosis of mental impairment.
Brown claimed she wanted to make up for a lost childhood but this failed to convince a local public safety officer, who said, "I can only guess if history repeats itself her motive has something to do with money. Unless we take it at face value that she wanted to go and relive her childhood. I personally don't buy that."
I'm not so sure. American TV is full of idealised images of attractive youngsters in high school settings; the epitome of this is the cheerleading squad, a guarantee of popularity, romance and social success. Now imagine going back and reliving your adolescent years, but doing it better this time with 20/20 hindsight and no zits - wouldn't you be tempted?
I leave the last word to one of her classmates; she did, he said, look a bit older, but they didn't question it because "You just go, ' Aw, alright, whatever'."
Posted by Macheath at 12:47