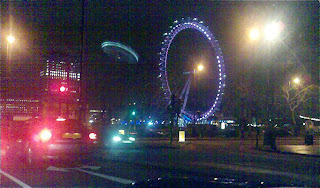 Aliens in UFOs have visited Earth, says David Cameron
David Cameron said he "was convinced" the Earth had been visited by aliens and has vowed to publish any secret files that may exist on UFOs if he becomes prime minister.
Telegraph Online 27th Jan 2009
All is not quite as it seems, dear Reader. In fact Cameron was making what we on Earth call a joke, in response to a question at a 'Cameron Direct' meeting in Tynemouth, but this did not prevent the Telegraph embellishing the article with links to an assortment of UFO stories - my favourite being 'Tentacled UFO's at Turbine Site' - presumably to keep the X-files fan-club happy.
Despite beginning his answer with a joke - albeit one straight out of Billy Bunter; ' I know we've been visited by aliens; Jenkins Minor is one of them!' - he marred the effect by earnestly promenading once more his belief in freedom of information and openness. Placed on the hook by his questioner, he gave a delightful display of wriggling ambiguity as he neither confirmed nor denied belief in the existence of intelligent alien life out there, but insisted that he 'would always be entirely open and frank about these things'.
Well, that's nice to know. It's always a risk when politicians appear in public that someone with a really wacky idea can put a spanner in the works. In this case, I'd love to know whose crazy notion it was to take the laudable concept of regular meetings with the general public and curse it with the label 'Cameron Direct'.
Posted by Macheath at 16:31