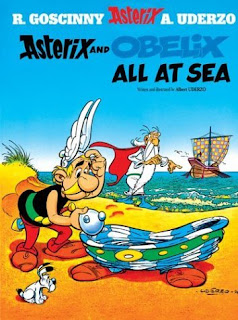 Why let a little thing like death stand in the way of your career? Albert Uderzo (81) – the surviving half of the duo who created Asterix and Obelix – has authorised publisher Hachette Livre to continue the series of 33 books after his death.
When story-writer Rene Goscinny died, Uderzo took on the task of producing text as well as pictures. Although an undeniably talented illustrator, responsible for some of the most memorable comic creations ever, Uderzo lacked Goscinny’s literary touch and the subsequent stories were lacklustre imitations of their predecessors.
Now we see the prospect of an ersatz Asterix; the Gauls reduced to little more than creations in an ongoing soap opera bereft of the wit and style that endeared them to millions. It remains to be seen whether these, like the ones written by Uderzo alone, will continue to bear the names of Uderzo and Goscinny.
Southern gothic novelist Virginia Andrews, for example, has been particularly busy since shuffling off this mortal coil in 1986. Her eight novels, featuring such salubrious plot devices as child abuse and incest, were standard teenage fare in the 80s for those who avidly consume misery memoirs today. So successful were they that, after her death, her family employed a ghost writer to continue the sagas under her name and the canon now stands at 50 books and counting.
Posted by Macheath at 17:17