Twilight Vampires - the fall of the House of Poe 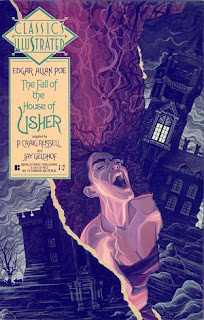 Drape yourself in black velvet! Dig out those funereal lace veils! Tomorrow we celebrate the 200th birthday of master of the macabre, Edgar Allen Poe. All over the globe, cognoscenti will be croaking ‘Nevermore!’ and raising a glass of amontillado to the man who put the ill in spine-chilling.
Poe’s florid and suffocating tales of aristocratic death and decay – think ‘the Addams Family’ rewritten by Baudelaire – have left their indelible mark on the classier type of horror fiction since the mid 19th century. In fact, it would not be too far-fetched to lay at his door the entire Goth subculture; black clothing, pancake make-up, obligatory miserable expression and all.
Now here’s a question – do Goths grow older? What happens when they reach their 20s and beyond? Do they simply wake up one morning and discard their carefully constructed wardrobes in favour of mainstream clothing? Is the Goth in fact a larval form, ready to hatch one day into a well-scrubbed adult of normal hue? I think we ought to know.
Perhaps the hard-core ones simply retain their youthful looks forever, like the vampire siblings in teen chill sensation ‘Twilight’. America's West Coast being distinctly short of ruined castles to waft around in designer nightwear, the local Undead have had to have a bit of a rethink, so, despite being 80-odd years old, they have taken a leaf out of Wendy Brown’s book and enrolled in the local high school (although, being moody and magnificent, they presumably didn’t try out for the cheerleading squad).
Posted by Macheath at 12:38