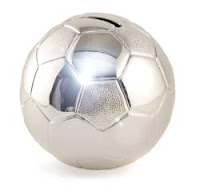 So you’ve got a spare £100m burning a hole in your pocket. What do you do with it? Invest to revitalise recession-hit industry? Start a charitable foundation? No, you buy a footballer. For £100m, he’d better be pretty damn' good!
Those in the know tell me Kaka is, indeed, a gifted player, but for that sort of money I’d expect him to dash off the odd string symphony in his spare time while solving Fermat’s last theorem and finding a cure for cancer.
How did things get this far out of proportion? An average salary of £1.1m (in the Premier League) to play a game while the country slips further into economic crisis is performing a full violin concerto while Rome burns. Perhaps that’s no coincidence – bread and circuses distract the populace from the worsening situation.
The emotional blackmail of a lifetime supporting a club means fans won’t boycott. Instead, they cough up for ever-pricier tickets, TV subscriptions and merchandise, like parent birds struggling to feed an overweight chick.What will it take to make them finally crack? Perhaps Manchester City are about to find out.
For comments on the issue (and a lesson in the value of proofreading headlines) see Paul Kelso's Telegraph blog.
Posted by Macheath at 10:28