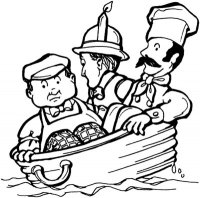 ...on the Manchester Ship Canal. Well, actually our intrepid heroes’ conveyance of choice for their pleasure cruise was an inflatable paddling pool. According to someone who claims to know them:

My friends [...] were just chilling, soaking up the sun and having a beer whilst not bothering anyone.

However, a passer-by, observing their antics, concluded that they were in difficulties and public-spiritedly dialled 999, at which point the fun started.

The emergency services were alerted and firefighters were sent from Stretford, the brigade’s in shore boat from Eccles, and the GMP helicopter from Barton.

The helicopter flew along the canal until the men were spotted at Barton Swing Bridge, where they glided gently to the bank and disembarked, to be given a severe reprimand by officers. According to a Police spokesman:

"They were given a flea in their ear and had the error of their ways pointed out to them.They should know better and were advised how much this costs in terms of resources."

How much is, of course, a debatable question, since the helicopters are presumably on standby all the time, as are the police boat crews; in any case, I'm not entirely sure why the helicopter was needed, given that they had a location fix from the caller. Still, it's nice to know that, should someone unilaterally decide you are at urgent risk, no expense will be spared.

The best part of this story, however, is the collection of comments it has amassed to date, mainly concerned with who is responsible for the thousands of pounds the callout cost the taxpayer.

Opinion is divided; some think the paddling-pool mariners are at fault for being in shipping waters without insurance or a proper craft, some that the passer-by who ‘grassed them up’ should foot the bill.

There’s an interesting diversion into the fact that the canal is owned by a private company - so why don’t they pay for their own security people? – and a bitter little reply to the suggestion that it would have been fine had it been a river -

Ooh, I dont know. Most of the rivers are owned by one Duke or another and they dont take kindly to us Northern commoners using them for our own needs!

Meanwhile, someone else makes a valid point: 'Hilarious, but the sad thing is, if you call the cops whilst your home is under attack from a howling mass of feral youths, you've got no chance of getting the helicopter sent over immediately. In fact, you'll be lucky to get a PCSO on a bike turn up three hours later......!'

And of course, there’s a running undercurrent of sentiment that it’s almost impossible to do anything remotely risky without someone turning up and stopping you for your own good.

Funny how one little story can encapsulate so many issues!

In fairness, it should be pointed out that the Manchester Ship Canal is a major waterway and somewhat removed from the sort of canal frequented by picturesquely-painted narrowboats.
Posted by Macheath at 18:14