Fun in the sun - or maybe not

Ryanair now, they're always good for a laugh. This time, the lovable Michael O'Leary - remember him? All-standing cabins and some novel ideas about co-pilots? - is in hot water over a poster. 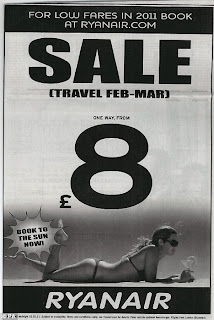 The Advertising Standards Authority took exception to the implication that the flights were to sunnier climes:

‘We considered that the average consumer would infer from the claim "Book to the sun now" and the image of the woman sunbathing, in a bikini, with a cocktail, that the promotion included fares to destinations warm enough to sunbathe in swimwear during the promotional period.’

In fact, happy £8 travellers, clutching suitcases full of bikinis and sun lotion, would be set down in the chilly February air of Aarhus, Dusseldorf or Oslo - almost certainly a sight worth seeing. You think it unlikely? Consider today's educational standards in the UK and the average level of general knowledge.

Or perhaps I've just spent too much time reading the Daily Mail - or Ambush Predator. Meanwhile, on other matters, it's pretty much business as usual:

Ryanair was also rapped over another advertisement, which offered flights to Dublin for £27.99, over complaints that it was apparently impossible to book at the price quoted because of an additional £6 online check-in fee. The airline was unable to ‘clarify adequately’ how the promotional fare could be achieved, the Advertising Standards Authority said.

Responding to the ASA, a spokesman for Ryanair said: ‘Ryanair has noted the ruling.’

So what? Don't the words 'water' and 'ducks back' apply here? The promotion is over, Ryanair have made their money and who cares? Certainly not O'Leary, who probably watched in amusement as the toothless elderly watchdog bared its gums at him.


Of course, I'm not the only one to find amusement in this kind of thing. They've appeared in other posts elsewhere, but you can never have too much of Fascinating Aida: