The glorious 13th April! What? You missed it? Then here for your delectation is the photographic record, courtesy of 'In Defence of Youth Work'. 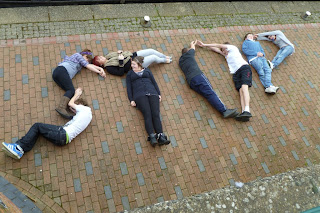 It's a protest by young people in Oxfordshire. 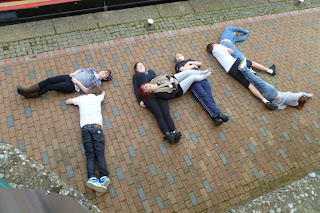 Can you guess what it is yet? 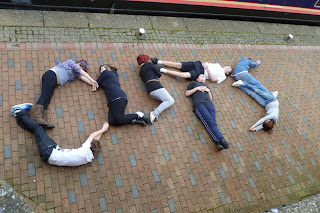 Yep, that last one's a bit harder - it says 'cuts', in case you didn't quite get it - but when there are only eight of you, some letters can get a bit tricky. Still, there you are - no fuss, no kettling, no criminal damage and quite a lot of fun by the looks of things; I'd call that a result.

This is a silent protest - 'Scene not Heard' - against cuts to Oxfordshire's youth services - their plan is to send a video of it all to David Cameron, though I can't see him settling down to enjoy it with a takeaway and a bottle of plonk.

Now I may not agree with them - after all, I'm not sure that universal youth services are the best use of taxpayers' money in these straitened times - but you have to admire their determination. After all, the vast majority of their contemporaries are permanently glued to me-pods and bookface, incapable of interacting with the real world.

And, while I accept that there is probably a youth worker or two in the background, it's a great opportunity for them to learn how to express themselves and that you don't need to smash anything to make a point. In fact, the response of the passers-by was generally sympathetic - even those disagreeing with them did so politely.

It's a good illustration of alternative tactics - a charm offensive instead of being, well, just offensive. Since protests against the cuts are unlikely to achieve anything directly however they are conducted, surely it's better to win the sympathy of the man or woman in the street rather than become a public menace.

And, cutest of all, the report carrying these photos ends with a link: 'More images of resistance here.' What's not to like?
Posted by Macheath at 14:25