No wet blankets at the street party 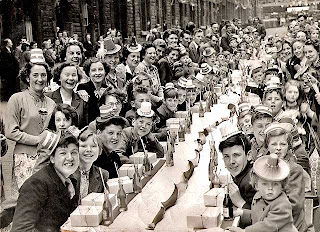 Royal wedding fever has gripped the nation, it seems. Not our nation, you understand - despite the best efforts of the media to convince us otherwise; the French are going overboard on the subject of les mariages princiers.
For a people who decisively ousted their royal family and fervently embraced liberty, fraternity and equality, they are unaccountably fascinated by the small doings of the anointed; even the fragrant Carla lacks the necessary mystique and je-ne-sais-quoi of the genuine article, despite her obvious merits as gossip-column fodder.
And now French fans of royalty are spoilt for choice; William and Kate have sneakily stolen a march on Albert of Monaco and are getting in there first. Poor old Albert gets relegated to the status of a summertime repeat.
Was that their intention all along, I wonder? To show the Eurotrash how real royals do it - in widescreen and HD? It would be amusing to think there was some such reason, and possibly some recompense for all the extra work I've put in recently.
You see, the RAF isn't terribly season-dependent, and royals run on a regular timetable unchanged since 1857; Balmoral, Sandringham, Trooping the Colour, Ascot, grouse and so on. So they couldn't possible be expected to realise that, out there in the real world, there are things like GCSEs. And tax returns. And hospital appointments.

The wheels of the public sector grind slowly at the best of times - in some offices, POETS* are common and an approaching bank holiday can reduce them to a state of torpor reminiscent of hibernating tortoises; what hope, then, of a swift decision or assessment in the next few weeks?

A couple of extra days holiday here and there may not be much to our Saxe-Coburg overlords, but to those of us who have spent the past few weeks re-arranging timetables and appointments set up months in advance, it's a right royal pain in the neck, to say nothing of the pupils who have lost vital class preparation time before their major exams.
And now the BBC is getting all het up about the lack of plans for street parties; Auntie thinks we should all be out there polishing the best china and brandishing brown betty teapots. French TV has been doing its best to join in, broadcasting footage of the 'Eastenders' jubilee party as a helpful demonstration of 'une fête à l’anglaise'.
Personally, I'm inclined to think we just can't be bothered**. Unlike the French, we've got permanent royals and they just aren't exciting enough. Instead, thousands of Brits are planning to jet off for ten days, leaving the field open for the foreign visitors expected to flock here in vast numbers.
So here's an idea; the tourist boards set up street parties for the visitors instead, along the lines of the one planned for Downing Street. The BBC gets plenty of interesting footage, SamCam pulls off her PR stunt, the royalists have a great experience and the rest of us can go and sulk in peace.

*That's 'Piss Off Early, Tomorrow's Saturday'; ever tried contacting a council office at 4pm on a Friday?
**There could, of course, be another explanation.(h/t JuliaM)
Posted by Macheath at 22:03