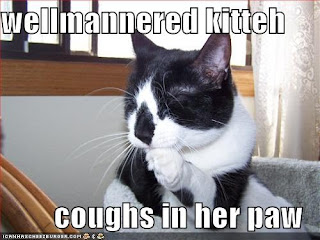 What do you do when you've got mice? Get a cat, of course. At least that was the suggestion Lord Elton put forward to deal with a rodent infestation in the Palace of Westminster.
There's a pleasing touch of Schadenfreude in considering that all those expenses-guzzling MPS may be getting a £1,000 pay rise, but they've also got free-range mice in their offices, tea-rooms and subsidised bars.
So last week, Lord Elton asked the Chairman of Committees 'whether consideration will be given to acquiring a number of respectable cats to reduce the rodent population of the Palace of Westminster'.
Not, you will notice, any old moggies or battle-scarred toms - only the best for our ruling elite. Sadly for this picturesque image, Lord Brabazon of Tara was adamant:
The possible use of cats, respectable or otherwise, to control the rodent population in the Palace of Westminster has been considered and rejected on a number of practical grounds. For example, the cats would ingest mouse poison when eating poisoned mice; there would be nothing ...to stop them walking on desks in offices and on tables in restaurants and bars; they can carry fleas and other parasites; and many people are allergic to cat hair.
His Lordship is, I suspect, not a cat-lover. Sadly we are to be denied the delightful concept of cats - honest, decent and beyond reproach - patrolling the corridors of power and removing intrusive vermin, since the problem is to be tackled with poison instead.
I feel there may be some kind of metaphor there.
Posted by Macheath at 08:30