A question of probability 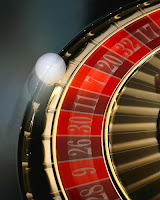 Seems the Met Office got it all wrong – forecast a mild winter and then watched us all freeze for weeks. And it’s not the first time – remember the barbecue summer predictions?

Well, yes I do. As it happens, I consulted the seasonal forecast pages for both summer and winter 2009, and I recall something a little bit different. The predictions in each case were clearly expressed in terms of probability and illustrated with helpful graphs – as far as I remember, 60% chance of this winter being milder than average and 40% chance of average or colder.

But hey, who wants to hear about percentages? What the public want is a good story, so the news media reported that it would be a mild winter, tout court. What a pity there wasn’t a handily-coined pithy phrase to match the ‘barbecue summer’ a Met Office spokesman unwisely mentioned earlier in the year.

So the Met office helpfully rounded things off for the media, and the media helpfully simplified it for the public - after all, this is a nation where millions of people believe they have a good chance of winning the national lottery. It's worth bearing all this in mind when the papers produce yet another figures-based story.

And all the while the probability graphs were there for all to see - 60% chance of a warmer than average winter. How much would you bet at those odds?
Posted by Macheath at 14:32