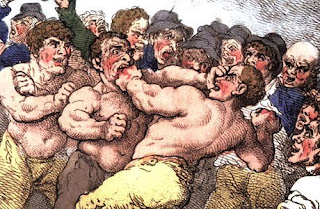 Seen any trailers for Eastenders recently? A kaleidoscopic medley of people shouting at, pushing and occasionally murdering each other, all designed to attract viewers in much the same way as bear-baiting or the Roman circus.
That the formula is successful cannot be doubted - the soap opera's recent anniversary confirms it - and Gordon Brown's publicity machine has merrily jumped on the bandwaggon.
Addressing the Welsh Labour conference in Swansea, Brown laughed off recent allegations that he had bullied staff at Number 10 saying he had been accused of everything short of killing Archie Mitchell in EastEnders.
He added: “I promise you, I didn’t even lay a finger on him.”
And therein, perhaps, lies the key to Brown's inexplicable rise in the polls. While Cameron continues his stiff-upper-lip old Etonian politeness, Brown secures the misery-memoir vote with a public display of grief, then sweeps in the Eastenders fan club by offering - allegedy - real-life aggro in Number 10.
We've had the sit-com and political drama of the expenses scandal - now we're being treated to a soap opera with all the personality clashes, rivalries and aggression the viewers have come to expect and relish. And of course they're going to want more.
Posted by Macheath at 08:36