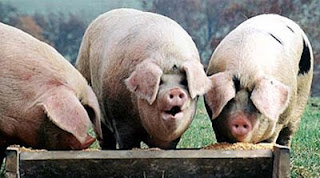 Their immediate conclusion that the whistle-blower must be a paid-up member of the political opposition is revealing to say the least and has led the good folk of Newgate to draw the following conclusions:

a) The glitterati of Nulab cut their political teeth in the early 80’s, when dirty tricks were de rigeur in student politics – the evil that was Thatcherism justifying extreme measures in opposition. They therefore assume all politicians are similarly devious and unscrupulous and that the only motive for exposure is to gain political advantage.

c) They are so detached from the real world that they cannot envisage anyone acting from motives that are not party political.
and
d) All NuLab have their snouts so firmly embedded in the trough that they know none of them could possibly be in a position to expose dubious expenses claims, hence their certainty that the mole is a Tory.

Remember the 80’s Labour rallying cries of ‘End Tory sleaze!’ and ‘Fat Cats Out!’? Like the unfortunate inmates of Animal Farm, we can now peer in through the windows of expense-funded second homes to see New Labour on their hind legs chanting their altered slogan; ‘Two legs good, four legs bad!’

*While we are inclined to believe Ms Smith’s assertions that she never intended the taxpayer to fund the films in question, it is difficult to remain charitable about the fact that they were presumably watched on the £1,100 home entertainment system she claimed on expenses.
Posted by Macheath at 16:13