The Funeral Pyre - a time-honoured tradition 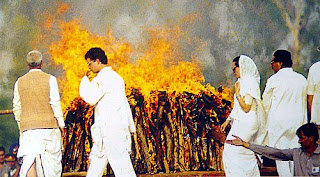 Government lawyers will tell a High Court judge next week that allowing an elderly man’s last wish [a natural cremation on a funeral pyre] would be abhorrent to the majority of the British population.
The Times March 21, 2009

Yet again, the Government presumes to second-guess the opinions of the people. On what grounds do they base their assertion? And even if they are right, should the opinions of a majority have any legal force in this matter?

I, for one, do not consider the practice per se abhorrent and, judging from the comments attracted by news reports, I am not alone. The funeral pyre is a tradition that has featured for millennia in many cultures across the world, a simple way of returning the constituent elements of the human body to nature via a process of combustion.

Since ‘indoor’ cremation is common practice, one can only assume the ‘abhorrence’ lies in the open-air nature of the ceremony and the fear of contamination by smoke; perhaps, too, there is more than a touch of xenophobia in their statement. Would the majority of the British population describe the public funeral pyres of Indira and Rajiv Gandhi as ‘abhorrent’ or do they apply different standards to the developing world?

In fact, although I do not share the religious beliefs of Davendar Kumar Ghai, I can see no real objection to a scheme whereby those wishing to be cremated in this way subscribe to purchase land and build a Government-approved burning ghat in a remote area where there are no residents to be inconvenienced and where relatives of the deceased would be free from harassment.

I can appreciate that lawyers may be obliged to oppose the ceremony under the terms of the 1902 Cremation Act – designed to legalise and regulate the process of cremation - but to bring in a spurious moral argument and claim majority opinion is neither necessary nor relevant.
Posted by Macheath at 12:13