Baby stilettos - a joke too far? 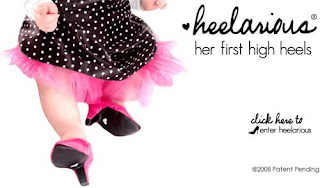 Isn’t it just the cutest thing? Don’t you just want to die laughing? High heels for babies! How ever did they think of that?

The answer can be found at the website of Heelarious, purveyors of satin stilettos for babies and now patent leather cowboy boots as well. It seems the American founder, taking her child to a party, had the Damascene revelation that it “would have been hilarious if I could have brought Kayla to a party in high heels when she was a baby.”

I suppose it depends on your interpretation of hilarious, but it seems enough mothers share her somewhat dubious sense of humour to enable the brand this week to introduce to the UK a range of cowboy boots in patent leather; black for boys and – predictably – pink for girls. They sell at £30, which seems a little steep for something designed solely to ‘bring hilarious laughter to mother and baby’.

The images of these monstrosities bear an uncomfortable resemblance to the exquisitely crafted silk slippers made for the bound feet of women in Imperial China and they are designed with much the same aim in mind – presenting the onlooker with an incompatibility of body and footwear designed to intrigue and titillate.

An infant decked out in these shoes is like a Chihuahua in a tuxedo, degraded to nothing more than a fashion accessory, a toy to dress up in fantasy garb. The director of Kidscape has condemned them as totally inappropriate and said ‘Parents should have more sense.’ I couldn’t agree more.
Posted by Macheath at 12:41