What's wrong at the Fat Duck? 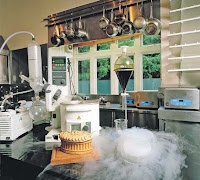 It’s been a bad week for the Fat Duck, with 400 punters so far queuing up to compare queasy symptoms. Although tests have shown no cause for the illness, still the hapless diners stand up to be counted.
Heston Blumenthal graced our TV screens this week to produce what the inimitable Caitlin Moran called ‘MSG-spritzed widdle-soup’. Is it possible that some of the celebrities rounded up to partake of luminous absinthe jelly and deep-fried mealworms inter alia felt a little off-colour afterwards? And by extension, might it be that there is nothing whatsoever wrong at the Fat Duck? No pathogens, no viruses, but simply the normal reaction of sensitive stomachs to bizarre concoctions of nitrogen-frozen this and vacuum-foamed that?
The Fat Duck has been lauded to the heavens and a meal there has become a significant life event for many, something to be boasted about afterwards in fulsome terms. You’re hardly likely to go round saying, ‘I had the £130 tasting menu and the next day the world fell out of my bottom’; it makes you look as if you aren’t sophisticated enough to cope with fine dining. Now it’s OK to admit it, it’s a different story.
Don’t get me wrong; I’m sure Heston Blumenthal is a culinary genius and deserves a place in British cultural history. But his work is the edible equivalent of haute couture, and, just as I am physically unsuited to wear a Dior catwalk sample, I doubt my ability to digest a collection of the Fat Duck’s specialities without some ill-effects. Doubtless Heston himself is immune, or blessed with a constitution to rival that of Bear Grylls (with whose catering arrangements, come to think of it, he has more than a little in common).
Posted by Macheath at 10:16