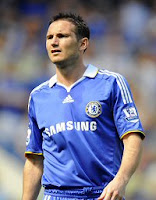 A rare foray into the word of Premier League football this week as we hear that Chelsea's Frank Lampard is said to have scored over 150 in an IQ test, putting him in the same league as Carol Vorderman (154).
Lampard has always been something of a favourite in Peachum's Tavern, the Artful Dodger being a lifelong Chelsea supporter; when the Urchin and his friends first discovered that players could be bought and sold, they saved their pocket money for weeks in the hope of putting in an offer for Lampard in the next transfer window.
Now we hear that he's not just a pretty face (and a nifty pair of feet), the question is why does he keep it so quiet? Surely a bit of Cantona-esque philosophising is called for - seagulls and trawlers, all that sort of thing. For those of us who only watch Final Score to see what colour shirt Garth Crooks is wearing this week (I like the pink one best), a bit of intellectual diversion would be very welcome indeed.
And on a more serious note, is he hiding his light under a bushel because even the dizzy heights of the Premiership are not immune to the anti-intellectual bias that is the scourge of our classrooms? Does he risk arriving in the dressing room to find his bag emptied out on the floor or his kit in the shower? Would they call him 'boffin' or 'swot' and laugh at him behind his back?
Instead of treating him as some kind of curiosity, why not make the most of this opportunity to show that academic ability is nothing to be scared of? There are thousands of boys out there underachieving at school; Lampard could be just the role model they need - "Sing it Loud, I'm Bright and I'm Proud!"
Posted by Macheath at 08:17