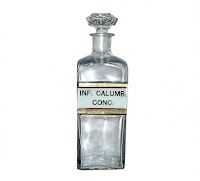 Perhaps I have spent too long in the confines of 18th century Newgate, but Quantitative Easing sounds to me like a dubious euphemism from 'the Harlot's Progress', or perhaps something out of Pepys diary – “To my Lord Admiral’s for Dinner, where I did partake over-heartily of Boiled Fowls, with the result that I am much troubled with Stomack Pains and in great need of Quantitative Easing”.
As I see it, the Bank of England sidles up to some other banks – possibly in a camel overcoat and brandishing a cigar – and murmurs "I’ll buy some bonds off you, if you like. Thing is, I ain’t got any of yer actual cash, but if we all pretend I have, then Bob’s yer uncle". (I tried the same thing in Sainsbury's, but they weren't having any of it.)
And since the other banks agree to pretend, they feel a bit richer and more inclined to lend out the odd sov here and there and so the economy recovers. Unless, that is, everybody gets carried away with pretending they’ve got money and the next thing you know, you need a wheelbarrow full of notes to pay the milkman.
And who is in charge of all this pretending and lending? Bankers, that’s who. I know they’ve had a bad press recently, but it wasn’t all undeserved and I for one find the prospect of letting them loose with a giant game of ‘let’s pretend we’ve got lots of money’ a bit worrying, to say the least.
Posted by Macheath at 13:55