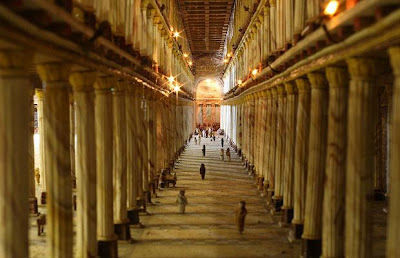 It’s not often that a news photograph literally takes your breath away, but the images of Alec Garrard’s scale model of King Herod’s Temple must come pretty close (slide show). The 78-year-old has spent 30 years so far on the project, re-creating the entire structure in meticulous and painstaking detail using thousands of hand-baked and painted clay bricks and tiny, hand-crafted figures.
This admirable feat of dexterity and scholarship has caused some anxiety in Newgate, however. As fans of fantasy writer Mary Gentle will be aware, the reconstruction of such a building is heavily imbued with symbolism. Borrowing heavily from Masonic lore and 16th Century philosophy, she has the characters in one of her novels reconstruct an ancient Temple to prevent the imminent disintegration of their city.
Some traditions hold that the rebuilding of Jerusalem’s Temple will herald the end of the world. While literal-minded types may take comfort in the fact that it's really Solomon's temple that counts and experts are, in any case unable to agree on the exact site of the original First and Second Temples, leaving aside the political and religious complications in the area, might it not be possible that, as in Ms Gentle’s book, an exact scale model would suffice?
Perhaps the model should be left unfinished in one small detail, just in case.