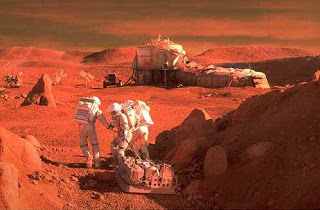 Tomorrow morning, 3rd June 2010, six aspiring cosmonauts will say goodbye to their loved ones and the sunshine of Earth and embark on a 520-day mission to Mars.

Or rather, 520 days in a sealed spaceship in a warehouse on the edge of Moscow's metropolis - seems we're not ready as a species to risk fragile personnel in the alien vastness of interplanetary space. In an experiment to explore the psychological deep impact of a journey to Mars, the crew will experience conditions as close to a real trip as possible.

Communications between the crew and mission control will be subject to 20-minute delay to simulate the time it would take for signals to reach Earth and air and water will be recycled. Meanwhile, cameras will monitor them 24 hours a day with staff ready to intervene should an inmate reach his own event horizon.

Sound familiar? 2005 saw the genesis of what Channel 4 described as 'the most elaborate hoax perpetrated in television history' when they convinced would-be reality show contestants that they were training for and completing a mission to an orbiting space station.

With the help of three fake contestants and two pilots - all actors - the deception was kept up for the duration, helped, perhaps, by the fact that the contestants had been subject to minute psychological profiling; according to Wikipedia, 'The intention was to obtain a group who were highly gullible, conformist, and ignorant about the show's subject matter.'

In an interesting twist, it was suggested by cynics that the whole thing had been an elaborate double bluff practised on the viewers and that the contestants were all actors - a theory based, in part, on the fact that they failed to spot the hoax despite several telling details, including the the presence of full Earth gravity throughout.

Of course, the selection process weeded out any who expressed an interest in science fiction. One imagines our intrepid cosmonauts are rather better informed; even so, it would be interesting to know how many of the classic sci-fi films* have made it into their video library - and whether, for example, they will be allowed a ship's cat.

*Some of which may have found their way into this post...
Posted by Macheath at 10:03