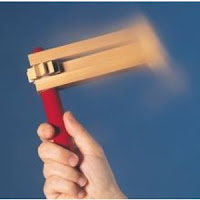 Blog posts and articles continue to proliferate on the abomination that is the vuvuzela but we're not exactly in unknown territory here. If you're considering a device to make as much noise as possible in the stadium with the maximum of annoyance, look no further than the once-popular football rattle.

The Spouse once owned the sixth Blue Peter Book, which gave clear instructions for making your very own wooden football rattle (in the days before 'elf'n'safety took away the hammers and saws). It's hard to imagine Peter, Valerie and John waving the things around, I admit, but it's a testament to the rattle's ubiquity at the time.

So where did they go? Où sont les cliquetis d'antan? Banned on safety grounds from the stadium; if you diligently followed Blue Peter's instructions, you ended up with a swinging sharp-edged block of wood weighing about half a pound, putting a whole new slant on 'You'll have someone's eye out with that!'

But even outside the grounds, they lost their appeal, went out of fashion. They're still freely available but, to the modern eye, they're back there with the Dansette and black and white television, part of ancient history.

So if the Vuvuzela is getting you down, don't give up hope. Even if it invades the UK, this too will pass. After all, when was the last time you saw anyone with a football rattle?
Posted by Macheath at 20:11