A paradox. A most ingenious paradox!

To continue the paradox theme, here's an interesting little vignette from the world of local government. Our heroes are a couple of retired teachers from Holmfirth. In 2007 they were given planning permission by Kirklees Council to build a driveway outside the house where they had lived for 30 years.

Four months later, the Council announced that it was putting a puffin crossing (actually a Pedestrian User-Friendly Intelligent Crossing, but I think the acronym may have been deemed slightly unfortunate and prone to ill-mannered graffiti) right in front of their their house.

Then came the coup de grace. In a novel variation of the time-traveller paradox, the Council issued a stopping-up order denying the Wrays use of their own driveway because it was too close to the crossing. 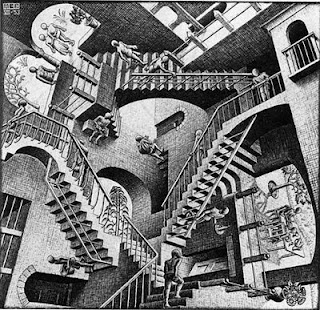 Part of the problem here is that local authorities act on a timescale which makes continental drift look indecently hasty: it's possible for projects to spend so long in the planning stage that by construction time, everything else has evolved beyond recognition and the original planners have long since retired.

And in any case, we're talking about Kirklees Council. Remember them? Won't let you be cremated in your own clothes? A £10,000 court case for a wind-blown sweet wrapper? Job advertisements in Gobbledegook(though admittedly that hardly narrows it down)? And recently responsible for this wonderfully ironic headline on Food Vision's website:

There's got to be some sort of metaphor in awards being awarded for awards, presumably ad infinitum (H/T Mark Wadsworth).
Posted by Macheath at 14:44