Trapped in a lift... 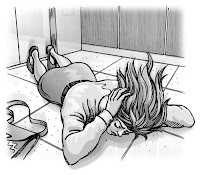 There's a disaster movie scene which has stayed with me for over thirty years - a group of people trying to escape from a skyscraper unwisely get into a lift which, after a brief inexplicable halt, plummets all the way down the shaft to a messy conclusion.

It's a fair bet that a similar scenario was running through the minds of at least some of the 15 people trapped in the high-speed lift in Dubai's Burj Khalifa - that and wondering whether it would help if they all jumped into the air at the moment of impact. After all, when you've just got into a lift on the 124th floor, anything unexpected is probably going to make you a bit jittery.
And all the more so given the financial circumstances surrounding the edifice in question - the result of world-class hubris that had to be bailed out by the neighbouring United Arab Emirates. The consequent change of name - in honour of the UAE president - from Burj Dubai doesn't exactly inspire confidence.
This is, after all, the place where the lack of properly planned sewage facilities led to disgruntled truck drivers dumping effluent into the city's storm drains and where an army of low-paid construction workers provide an unstable and shifting polyglot workforce - not exactly optimal conditions for building the sort of precision machinery needed by a project on this scale.
In fact, it says a lot about how much we take technology for granted that people are prepared to get into a metal box and be whisked upwards at 40kph for the pleasure of looking at, well, a lot of desert. And, of course, a sort of real-life Sim City (most of which, according to the Times, is still under construction).
I'll give the last word to a delightfully terse comment from the Times article:
bob bob wrote:
True justice: Stupid people get trapped in faulty elevator in world's tallest mistake.
Posted by Macheath at 09:21

Labels: dubai in the sh*t, technology