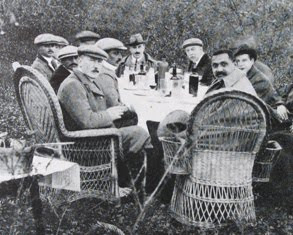 It seems that privilege is alive and well in the home of Liberty, Equality and Fratenity and the President is using it to get a leg-up on the world stage. In a bid to entice the world's rich and powerful to his door, Nicolas Sarkozy (portrait by Mark Wadsworth here ) has revived the chasse presidentielle and is inviting selected guests to shoot boar and stag at a chateau on the Loire.
Ever careful to preserve his public image, the great man himself does not join the party but delegates the role of host to his adviser Pierre Charon, who defends the shoots as a way of cultivating goodwill with corporate bosses, senior politicians, civil servants, ministers and ambassadors. “I bring back to Nicolas Sarkozy what I pick up at Chambord".
Charon goes on to add, in a slightly sinister manner, that the hunts "render many services in making people obliged to us”. I'm sure they do, what with the £175-a-head catering and the opulent surroundings of the renaissance chateau, not to mention the opportunity to rub shoulders with senior police and judicial figures.
Under Mitterand, these shoots 'became venues for deal-making, sometimes involving unsavoury characters who have since served time in prison'. Oh, to be a fly on the wall while these individuals joined judges and officers of the law in archaic torchlit rituals and banquets!
Chirac abolished the shoots as unfitting for modern democracy, and therein lies the problem for Sarko. It was only this week that the media discovered that the chasses had been taking place since December and there has been an outburst of indignation on several levels.
Obviously the sans-culottes rail first about the manifestation of privilege at public expense but, for those of us outside France, perhaps the major concern is the secrecy surrounding these meetings involving diplomats and heads of multinational corporations.
A century ago, England's Edwardian shooting parties formed the backdrop of high-level financial and political discussions the effects of which would be felt throughout Europe and America; now, it seems, Sarko is making use of the same tactics. Plus ca change...
Posted by Macheath at 08:33