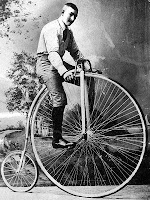 Like one of those magic eye pictures, the events of the past week, when viewed in a slightly different way, suddenly present a whole new political vista. Sir Nicholas Winterton channelling Marie Antoinette, Heseltine's gloomy prognostications and Portillo's doubts, all surfacing at once, add up to one inevitable question.
What if the Tories don't want to win the election?
Think about it - whoever ends up in Number 10 will be tackling a mess of epic proportions with a side order of chaos. It's difficult to identify any area of the public sector which does not constitute a ticking time-bomb, from our unemployable young to future pensions crises, from elderly care to childhood obesity.
Far better to let Gordon et al. return with a perilously slender majority to face inevitable decline and fall, Gotterdammerung and votes of no confidence, after which Cameron can ride in on his white charger and pluck the helpless Britannia from the jaws of disaster to riotous applause.
Meanwhile, Gordon's cronies don't want to have to clear the mess up either. Gordon himself may be clinging on to power with both hands and his teeth, but I can't see his minions relishing the prospect of years of public vilification as chickens come home to roost.
So Gordon and Sarah are given free rein to make use of their organs of choice, Piers Morgan and a supermarket magazine, to court the misery memoir generation. It's hard to imagine the sort of person who contentedly 'shares Gordon's pain' with a nice cup of tea actually getting out there to vote, so no danger there.
And we're likely to end up not only with a hung parliament, but with the undignified spectacle of both leaders trying to avoid power while pretending to campaign for it sincerely. And if that happens, we might even get Clegg for PM.
Posted by Macheath at 11:33