A piece of fiction today, with sincere apologies to Richard Bach.

Staff at Sellafield are considering a cull of seagulls as the site is overrun with birds, cats and mice, representing a substantial risk of contamination. Meanwhile, natural wildlife deaths on site mean they have 350 little frozen carcasses in storage as 'putrescent' nuclear waste pending proper disposal. 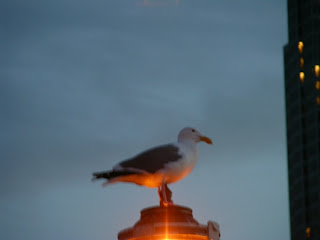 Ernest Rutherford Seagull hovered in the updraught from the cooling tower, watching mice scurry over the brickwork. The faint glow from his extended wingtips was matched by the eerie luminescence of the waste water lagoons where his friends were swimming.

He knew there was something different about the mice – something new about the way they gathered in small groups, then moved on decisively. Things were changing around Sellafield. Certainly the cats he had seen looked thinner, more desperate. Some of them were even hungry enough to tackle a seagull.

His friend Robert Oppenheimer Seagull manoeuvred into position beside him. Ernest Rutherford Seagull pointed downwards with his beak. “Do you see anything different about them?” he asked.

At that moment there was a loud bang and Robert Oppenheimer Seagull crumpled into a ball, plummeting downwards towards the ground and landing in an untidy heap. A man in a biohazard suit picked him up with tongs and placed him carefully in a freezer bag.

Behind the man the grass stirred, although there was no wind. There was a glimpse of fur, the twitch of a tail, a slight hissing sound. The mutant feral cats were gathering. And they were hungry.

Ernest Rutherford Seagull wheeled on the updraught and flew sadly away towards Whitehaven, his wings still glowing faintly.