"You're a load of useless bloody loonies!" 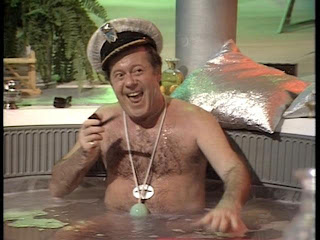 The Urchin has come up with an interesting idea: with the imminent demise of Big Brother, there will, he reasons, be plenty of useless narcissists cluttering up society.
Why not, then, build a Big Brother house – or even a whole group of them – on and under a brownfield site somewhere in an industrial city? Or, in fact, a chain of them throughout the country.
You fill the houses with cameras and employ a skeleton staff to monitor the inmates and set them tasks, including growing and processing their own food* and exercising on an electricity-generating treadmill. You advertise for volunteers and select those whose indefinite absence would most benefit society.
And then you shut the door. Permanently.
To keep the inmates motivated, you could have occasional mock eviction polls – then give the losers ‘another chance’ and send them to a neighbouring house. With a bit of luck, you could keep it going for years as they act up for the cameras, blissfully unaware that no one is watching.
Of course, admirers of the late Douglas Adams will have spotted that the Urchin is merely re-creating the solution devised by an over-populated planet to get rid of a useless third of its population. With a simulated Mars mission already underway, we have the technology (or at least the Russians do) to build a self-contained static vessel.

Think about it; soon we, too, could have our very own B Ark.
*The Urchin had actually devised a way to make them entirely self sufficient which I won’t go into here – I knew we shouldn’t have let him watch Soylent Green. Incidentally – trivia alert! - the title of yesterday’s post is borrowed from Harry Harrison’s story on which the film is based.
Posted by Macheath at 20:53