...especially if someone's trying to make you do it.

Today’s Local Government conundrum: You are building offices for 300 council workers in a rural town of 45,000 residents. How many parking spaces should you provide?

Well, you’re doing your best to be green, so surely all these workers will be too. And there are buses from the surrounding areas (as long as they don’t want to travel before 8.15 or after 5.45) and a railway station nearby.

But some of these workers need to go out and about as part of their jobs; oh dear – that means they’ll need their nasty polluting cars!* So you’d better give them a few spaces. About 55 should do nicely.

After all, you’ve sent round plenty of e-mails extolling the virtues of car-sharing and public transport and proclaiming the health benefits of cycling (never mind that the office is at the bottom of a hill that would have hardened veterans of the Tour de France muttering darkly about ‘étapes de montagne’). 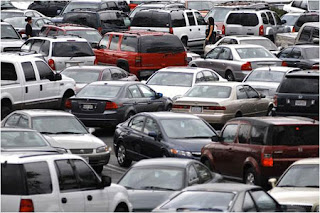 Fast forward a year, and there is parking chaos. Practically all 300 of those ungrateful workers are coming to work by car on the flimsy excuse that they need to drop off children at school in the morning or pick up groceries on the way home, or that their village bus only runs on Tuesdays.

And the lack of on-site parking means they are using nearby streets – in fact competition for spaces is so fierce that residents emerging from their front doors in the morning have found themselves facing an armada of impatient council workers waiting for them to drive away and release a space.

The Council confirms that it ‘has some onsite parking for staff who need to travel and other staff have been instructed not to park in residential areas’, so things aren’t much better in the local supermarket, where customers now complain they can’t park between 9 and 5.

The Council is finding out the hard way that you just can’t force people to be green - particularly if it makes their lives more complicated and difficult.


*Don’t worry – they’re planning a fleet of electric cars plus charging points at a mere £100K each.
Posted by Macheath at 21:49