B*llocks on a triple word score 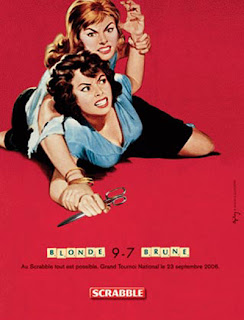 There's a rift in the lute. An unbridgable gulf has opened up in the Tavern and its name is Scrabble.
Ever since the official Scrabble magazine published its list of two-letter words, the battle lines have been drawn. The Purists insist that Scrabble is, above all, a game of verbal dexterity. No abbreviations, no proper nouns and a word is only valid if the player can not only define it but also use it in a plausible context.
On the other hand, we have the Pragmatists,who see the list as an essential tool and have gone to the lengths of memorising all 94 combinations. "What does the meaning matter?" they say, "it's the score that counts", smugly placing 'zo' on a triple letter score.
The Purists have been fighting a valiant rearguard action but it's a doomed struggle. All but the most principled are liable to cave in when 'aa' or 'st' opens the way to a high-scoring word, especially when the two-letter lobby are pointing out that the list is officially endorsed by the game's makers.
There's an unlikely lifeline, however, in the News of the World* this week. It seems the Scrabble dictionary and electronic versions of the game have upset anti-racism campaigners by allowing pejorative terms for ethnic groups, or, as the NotW has it, 'vile racist insults'.
The chief executive of Show Racism the Red Card says the words should be removed immediately but, according to the paper, 'A spokeswoman for Scrabble's maker Mattel said: "These words are in the English language, they are legitimate. We're not about censoring words."'
Now I'd like to think the Tavern inmates are unlikely to use racist insults (which are presumably proper nouns anyway) but the list of offensive words also included a selection of the more familiar Anglo-Saxon anatomical terms - to which the above statement could also be taken to apply.
So the Purists at last have a strategy for counter-attack. The next Pragmatist to put down 'ch' or 'ky' will, letters permitting, be assailed for the remaining duration of the game with a stream of profanity guaranteed to offend - and all with official endorsement.

*Not the Tavern's usual stamping ground - the story surfaced at Unenlightened Commentary with an entertaining angle by Ross.
Posted by Macheath at 20:33