The tracks on the tank go round and round... 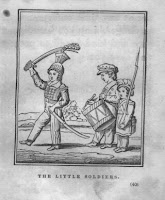 From the Telegraph Scottish edition:

Armed forces chiefs angrily denied SNP claims last night that they are dispatching soldiers into primary schools and nurseries to "soften up" children for recruitment.

Christine Grahame, a senior MSP [...] suggested a desperate MoD is deliberately targeting young children in an attempt to boost its "flagging recruitment targets".

It seems that, like vampires, the armed forces have to be invited over the threshold if they are to enter schools to talk to pupils. Miss Grahame claims that if no written invitation can be produced, the forces must have approached the school uninvited as 'part of a drip, dip, drip approach to securing more recruits'.

One wonders what her response would be should, say, the coastguard or the local council offer to talk to pupils about the work they do. Meanwhile, she's been a very busy body indeed, tabling Freedom of Information requests to Scotland's 32 councils.

Extracts from the documents, provided by Miss Grahame, appear to show the Army invited Scottish Borders Council to send pupils to attend a work experience programme.

Oh noes! And that's not all: a submariner married to a member of staff visited a nursery along with other parents who came in to talk to children about their jobs. Foolishly, he did so on a verbal invitation and so is unable to present an authorisation in triplicate to the redoubtable Miss Grahame.

"These latest documents show that not only is the recruitment strategy aimed at children in primary schools, but that representatives of the armed forces are now regularly going into nursery schools too."

Quick! We must stop this underhand recruitment process before the nation's four-year-olds take the Queens's shilling and march away!
Posted by Macheath at 12:33