Attack of the forty-pound lobsters 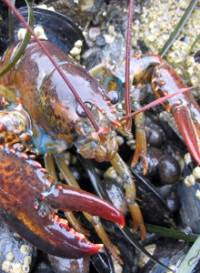 Be afraid. Be very afraid. There’s something lurking in the waters off Selsey.
Scientists say British lobsters are threatened by the appearance of homarus americanus – known to fishermen as the great big bastard Yank lobster - which can weigh up to three stone.
These monsters can carry a disease – spread by cannibalism – which can kill their weaker European cousins and are far more aggressive than the home-grown gammarus variety (presumably that’s why the lobster fishermen of Maine have such a tough reputation).
And they didn’t stray into English waters by accident. Fishermen have found only adult specimens, and only in one location. Scientists believe that they were bought at fish markets or restaurants and released into the wild by persons unknown.
You can picture the scene; misty-eyed animal rights activists save up to purchase a massive imported lobster, then release it into the sea – probably with cries of ‘Swim, little one, swim’ - before heading off to celebrate with a cup of fair-trade chamomile tea.

For weeks they'll be patting themselves on the back - it was awesome! Like 'Free Willy', only spikier - and congratulating themselves on their gift to Mother Nature. Meanwhile their protégé happily sets about cannibalising every homarus gammarus it can find and wrecking the local ecosystem.

One can only hope that the next one gives them a very nasty nip indeed.
Posted by Macheath at 14:21