There's no getting off mascot-free.

You know the old adage that 'a horse designed by a comittee would be a camel'? Well, it turns out that if you want a figure to represent the London Olympics and have a vast budget and 40 focus groups, you get these; 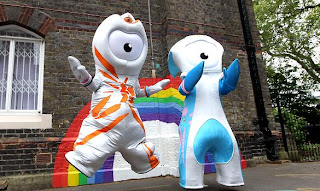 described in a comment on the Times article as 'The result of a drunken one-night-stand between the Michelin man and a teletubby' , though I prefer Pavlov's Cat's version.

Wiser heads than mine have been mining the rich vein of comic potential in this story, so I shall merely invite you to consider a couple of minor issues - firstly that, inside those presumably hot and stuffy suits are two actors who must be profoundly grateful that their faces are obscured, and secondly that these repulsive creatures will be with us for two years.

You'd think they'd have learned from the migraine-inducing 2012 logo - memorably compared to alcopop-induced vomit - but no, the creators of these two 'futuristic magical beings' are confident their offspring will generate £15million in merchandising profits, possibly with a nice sideline in compensation payouts under the Disability Discrimination Act every time one of us laughs at their monocular state.

In fact the organisers hope that the initial story-book and animated film will eventually spawn a cartoon series (I wish I could doubt that, but have you seen the rubbish on children's TV recently?) as well as a mountain of plastic tat. Schools can even request a visit from the characters on their national tour in 2012 - that should ensure a few nightmares!

Does anyone else remember Ronald Searle's Molesworth cartoon depicting the educational trust Gabbitas and Thring as a pair of sinister top-hatted Victorians? I wonder what he would have done with Wenlock and Mandeville - however worthy the names, I can't help feeling they should resemble the hand-holding perfumed villains in 'Diamonds are Forever'.
Posted by Macheath at 15:49