And now on BBC 1: The Luvvie Boat 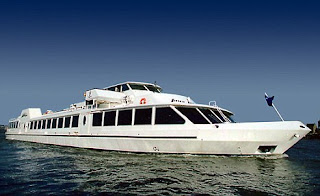 One of the more bizarre elements of the BBC's Election Night coverage prompted Ross at Unenlightened Commentary to remark, "The things you see when you don't have a U-boat to hand," in a post appropriately entitled 'Ship of Fools'.
He was, of course, referring to the £30,000 party hosted by the Corporation at which dozens of celebrities were wined, dined and occasionally asked to pronounce on the state of the nation. Quite why our licence money should be spent ensuring Andrew Neil could call on the political acumen of Joan Collins or Piers Morgan, I'm not entirely sure.
While the presence of rival historians Schama and Starkey is understandable, it's hard to imagine the reasoning behind the invitations to Bruce Forsyth, Ben Kingsley and Kelly Holmes, whatever their respective merits in their own fields. And why did it have to be on a hired boat on the Thames? Last time I looked, the BBC had a state-of-the-art Election Studio with plenty of room for extra guests.
According to a BBC spokesman ‘As part of our election night coverage, we produced live interviews and broadcasts throughout the night from a boat moored outside the London Eye, discussing the election results with views of the House.' (Translation:"we wanted a load of celebs to upstage the competition but they wouldn't play ball unless we gave them free champagne".)
It's the apotheosis of the pointless on-the-spot report - Robert Peston shivering in a deserted Square Mile at 10:15pm or Nick Robinson standing in the rain outside Number 10 while the PM's in Scarborough. Here's the thing - we already know what the Palace of Westminster looks like. We really don't need you to spend £30,000 so you can sit in front of it cosying up to Piers Morgan.
The party did, however, serve to underline just how far we've moved on since the 70's, when election coverage meant a studio full of union bosses, expense account bellies and chins a-quiver, pontificating on the results. Instead, in an enduring legacy of 'Cool Britannia', the BBC sends its presenters out on election night to fawn on perma-tanned, botoxed celebrities - a sign of the times indeed.
Posted by Macheath at 17:23