'Er...I'll have the second prize, please' 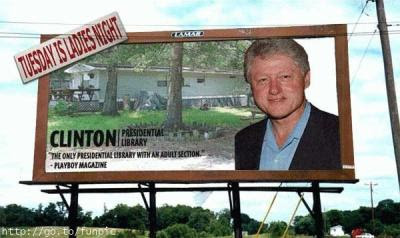 It's been an odd week for fundraising. First, the Urchin's school holds a sponsored swim to fund a playground for Guatemalan orphans and rewards the year-group that raised the most with a mass outing to a theme park - 'Hey, guys, we've bought you a tyre swing; now we're off to Alton Towers to celebrate!' - and then one of the least desirable raffle prizes ever is offered in the USA .

'In an e-mail sent to millions of people who supported Hillary Clinton’s White House campaign, the former President asks: “How would you like the chance to come up to New York and spend the day with me?” For those who would like the One-Day-With-Bill prize, an online donation of as little as $5 will buy them the chance.'
It seems it's a costly business running for President - estimates of debts run up by Hillary during her campaign run at about $25m, which rather takes the shine off the assertion that anyone can be president of the United States. As Secretary of State, Hillary is barred from fundraising so Bill has taken on the task.
This is apparently the second time this year he has raffled himself - the article doesn't say what happened last time; perhaps it's still sub judice - even though the Clintons aren't exactly short of cash. Their joint earnings from speaking engagements and memoirs 2000-2007 are estimated at $109 million.
And there's a horrible future spectre looming - if, as we heard yesterday, Cherie Blair took to sitting in on Cabinet Meetings (h/t Mrs Rigby), could she be harbouring future leadership aspirations? And if so, will we one day see Tony Blair selling himself to fund his wife's political ambitions?
Posted by Macheath at 08:46