Where's a stick with an 'orse's 'ead 'andle when you need one?

Hot on the heels of the Clacton Lion (big and far away) which turned out to be Teddy Bear the Maine Coon cat (small and close up), comes news (via the Telegraph: check out the deadpan picture caption) of a lion prowling round a Bedford housing estate.


The first eyewitness said she came face-to-face with the lion in Thor Drive this week as she walked her Yorkshire Terriers.


Or cocktail snacks, if you happen to be a passing lion. Our intrepid heroine was seemingly undaunted by this unexpected encounter:


“I was stood about four feet away from it and I’ve seen enough National Geographic programmes to know it was on the prowl,” said the woman, who declined to be named “for fear of being mocked”.

Or, frankly, disbelieved - I mean, four feet is pretty close when you're talking about a top predator measuring 7-9 feet nose to tail. It would be unkind, though, to doubt someone so sure of her level of expertise, however vicariously acquired.

Her account prompted another woman to come forward and announce that she, too, had had a close encounter of the leonine kind in nearby Asgard Drive (sadly, I'm sure the occupants of these locations aren't half as exciting as they sound).

Our second Valkyrie also appears to have watched enough National Geographic to volunteer her opinion of animal behaviour:

Both women are adamant that it was too big to be a domestic cat, which is where things start to look fishy; I mean, if you are suddenly confronted by a large carnivore, fangs and all, at a distance of a few feet, it's not the first comparison that springs to mind, is it?

And if you're asked later whether there's any chance it could have been a domestic cat, the answer would surely be "Hell, no!", rather than pointing out it didn't look like a dog either. Come to think of it, "I stood about four feet away from it" and "I felt a bit strange afterwards" sound like startlingly low-key reactions, under the circumstances.

Sadly for the intellectual future of Britain's couch potatoes, other residents of the estate don't seem to have much faith in the educational powers of National Geographic either:


The animal was last seen heading off in the direction of a neighbouring pig farm.

Locals speculated that it could have been a pig. 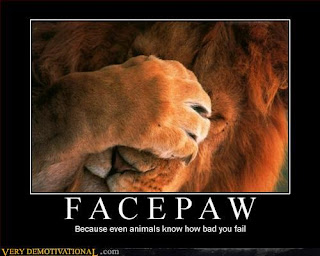