Overdressed, overpriced and over here, the American-style cupcake has, in a relatively short space of time, elbowed its way to the heart of popular culture. 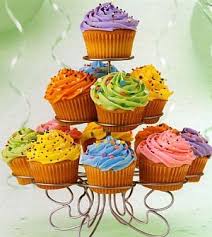 Personally, I can't stand the things, but I am told that, for a certain type of woman at least, buying and eating them bestows an air of New York sophistication with a frisson of 'Sex and the City' decadence.

It seems rather a lot to expect of a lump of sponge cake topped with vast quantities of sickly buttercream, if you ask me, but by all means go ahead, if that's your thing.

Only you might want to go easy on the glitter, judging by the results of a recent analysis by the appropriately down-to-earth West Yorkshire Trading Standards Service.


An investigation into “glitter” cake decorations found that some were unfit for human consumption and suited only for use on greetings cards.


When the plastic glitter was placed under a microscope, it was shown to be made up of hexagonal fragments with jagged edges.

In one case, the glitter was made of finely powdered brass.

Fans of cupcakes say their appeal lies in the their presentation - the care taken to create an ephemeral object of beauty with the bonus of an instant sugar hit (though I wonder whether the stick-thin fashionistas who claim to adore cupcakes actually keep them down for long).

They are portrayed as the ultimate in affordable self-indulgence; from upmarket bespoke bakeries to my local supermarket, manufacturers compete to offer the most elaborate specimens, lavishly decorated with the brightest colours industrial chemistry can contrive, along with what looks like the contents of an eight-year-old's trinket box.

The flavour, of course, is essentially immaterial; the point about cupcakes is to be seen eating them - well, that and the sugar content, which can be up to 75% of the total weight. One might argue that the reason for all the elaborate decoration is that any adult capable of stomaching something so sweet is likely to have an overwhelming preference for fluffy frosting and sparkles.

Trading Standards warn that they do not know what the effects of eating glitter might be - I can see some interesting lawsuits pending when Yummy Mummies find out what they've been feeding their little darlings - but we can be fairly sure they will be, by and large, confined to that sector of the population prepared to throw common sense to the winds for a sparkly, self-indulgent treat.


Postscript:
Some rather different cupcakes made the news this week (caution: best not to visit the link if you are eating).