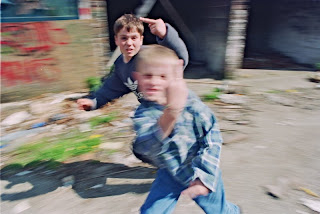 The men (and women) in white coats have spoken – ADHD is officially ‘a brain problem like autism’.

'Researchers at Cardiff University ‘compared genetic samples from 366 children diagnosed with ADHD with DNA from 1,047 people without the condition.

They found that 15% of the ADHD group had large and rare variations in their DNA - compared with 7% in the control group.’

Not quite as conclusive, then, as the headlines would have us believe.

Oliver James puts it rather less kindly: "These findings have been hyped in the most outrageous fashion", although, to be fair, Professor Anita Thapar describes it as ‘the first direct genetic link to ADHD’, with the implication that there are more waiting to be discovered.

For many parents, though, this will be reassuring news; the strain of managing a truly hyperactive child is often compounded by uncomprehending and occasionally ill-concealed impatience from other adults.

Unfortunately for these parents, despite their often exhausting efforts to keep things under control, the traits (I won’t call them symptoms) exhibited by their offspring are, at times, virtually indistinguishable from the behaviour of children who are simply spoilt, undisciplined or neglected.

Diagnosis is, at present, a blunt instrument. Typically, a child with ADHD will have had serious sleep problems from birth, with unexplained crying as a baby developing into frequent tantrums and impulsive and occasionally violent behaviour as a toddler.

But in a chaotic household with unstructured bedtimes, who is to say whether a child’s sleep problems or irritability are the result of ADHD or of his home environment? Equally, is repeated pestering of adults – another trait – simply the result of being ignored by indifferent parents?

The problem with this story is that it has gone off half-cocked. It suggests that as-yet undiscovered genetic factors may be at the root of the disorder but gives no certain means of diagnosis and thus no way to distinguish genuine disorder from the results of poor parenting.
Posted by Macheath at 13:38