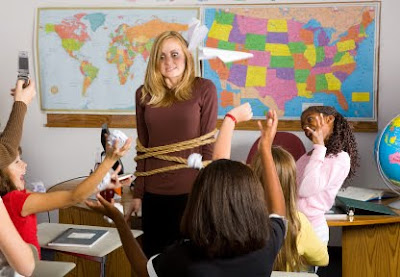 First they took away the gowns, then the raised desks - too hierarchical - and the right to exclude unruly pupils (or shout at them - or, perish the thought! - make sarcastic comments); now pupils are to address their teachers by their first names.

'The pupils at Boughton-under-Blean and Dunkirk Primary school in Faversham, Kent have been ordered to abandon using teachers’ surnames with the title of either ‘Mr’, ‘Ms’ or ‘Mrs’ in front of it.'

This sort of thing isn't new, of course - it's long been a feature of schools at the extreme end of the progressive spectrum - but it's a worrying development, particularly in the light of incidents involving cyberbullying or intimidation. Not that that seems to have occurred to anyone:

'School bosses say they hope the trial will “enhance the relationship” between the kids and their mentors.'

Is it me, or do the words 'enhance the relationship' ring alarm bells left, right and centre? The relationship between teachers and pupils is a complex one - for the protection of both parties*, a certain distance has to be maintained at all times. It's clear where the blame lies in this case:

'Headteacher Hugh Greenwood, who came up with the idea, said: 'We hope the pupils really take to the concept. "We think it makes learning a more personal experience and allows teachers to come down to the pupils level."'

You know what? I don't want my children's teachers to 'come down to the pupils' level'. I want them to command respect both for their adult status and their superior knowledge. It's damaging enough when parents try to be the child's best friend - when the teachers are at it too, there's no-one left to emulate except celebrities.

It all goes, once again, to prove the principle that head teachers need to be kept busy or they start interfering with the running of the school.

*It doesn't look as if there's going to be much help from the unions here, if this from JuliaM is anything to go by.
Posted by Macheath at 15:16