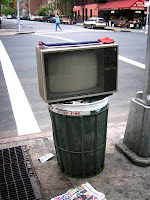 Trawl through the Daily Mirror and you’re likely to feel in need of a shower, particularly after reading this. A depressing late-night ‘broken Britain’ conversation led to discovering Karen Matthews’ description of life behind bars:
"It's great here. We've got a pool table. I even have my own cell.... We've a wide-screen TV in the lounge." When asked what she missed, she quickly replied: "Sex, shopping and coffee at my neighbour's house." She never once suggested she pined for her seven children.
There’s something particularly depressing in her description of watching her own case being discussed on a chat show – ‘Jumping up and down in excitement on her chair, she said: "We were watching it in my cell. There were six of us. The audience were a*******s."
So this deluded and uneducated woman has daily access to hours of television, including the sort of chat shows that gleefully air the dark underbelly of society. And presumably the choice of evening entertainment on the communal wide-screen TV is hardly going to be what one might call edifying.
Matthews is herself a product of the chat show generation; shallow, immature, self-centred, lecherous and voyeuristic. What a waste, then, to allow her and her like to spend years absorbing yet more of the hypnotic sensationalism that has helped create their distorted values and moral standards.
Or is it now an inalienable human right for prisoners to watch trash TV?
Posted by Macheath at 10:19